by Rachel Pelta  | December 1, 2019
Learn the difference between being laid off or fired, what to say for either situation in an interview, and how to bounce back after job loss.
Save 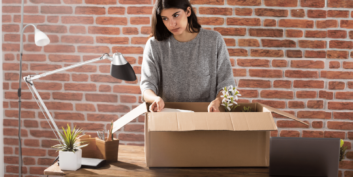 Losing a job is never fun. Beyond the loss of a regular paycheck, you may worry about losing insurance, friends, and maybe even a sense of purpose. But, once you get over the shock of losing your job, you’re going to start looking for the next job. And you’re probably worried about what comes next.

Whether you were laid off or fired, eventually, you will have to explain why you lost your job to prospective employers. And, while you may think the two terms are interchangeable, they’re not.

In fact, if you claim that you were laid off vs. fired, you could find yourself without a job for a lot longer than you want.

Laid Off vs. Fired: There Is a Difference

When you’re laid off from a job, it happens due to circumstances out of your control. Generally, layoffs occur when a company needs to cut costs, though there can be other reasons for cutting staff. The key part of “laid off” is that you lost your job due to the company’s performance, not your individual performance.

However, when you’re fired, it’s usually due to your performance. Maybe you broke a rule (or several rules). Or, you failed to perform your assigned duties even after being coached and given multiple opportunities to improve. Whatever the reason, you lost your job as a direct result of your behavior.

Terminated Isn’t Fired or Laid Off

What Happens When You’re Laid Off or Fired?

While firings generally happen suddenly and without warning, when you’re laid off, you likely have 30 days written notice that company layoffs are occurring. In either case, you should participate in an exit interview on your last day of employment.

Keep in mind that, generally speaking, exit interviews are not mandatory. And, while it’s understandable that if you’re fired you may not want to participate in an exit interview, it’s a good idea to do it anyway.

During an exit interview, you’ll receive a list of any benefits you’re entitled to and what you need to do to access them. For example, no matter how your employment ends, you are legally entitled to COBRA your health insurance and remain on the company plan for up to 18 months.

However, you have to pay the full premium amount every month. And, it’s legal for your company to charge you up to 102% of that premium. During the exit interview, your employer will tell you what amount you need to pay each month and when you must make the payment by to remain on the policy.

The exit interview is also the time when you’ll turn in any company property, or make arrangements to return it. You’ll also likely be asked to sign legal documents. However, you do not have to sign any documents during an exit interview. You are allowed to take the documents with you and have a lawyer look them over before you sign them.

You also do not have to sign the documents if your lawyer advises you not to. And, even if you do sign any documents during the exit interview, in some cases, you may have the right to rescind your signature during a limited window.

When You’re Laid Off: The Specifics

While it’s not a guarantee, many companies offer laid-off employees severance packages. This is usually a dollar amount that’s meant to blunt the impact of losing a regular paycheck. In most cases, your severance pay will be a lump sum, but sometimes you can choose to spread out the payments.

Some severance packages also include covering some or all of your COBRA payments for a period of time. Or, your employer may offer to help you find another job through an outplacement firm or even pay for job retraining.

One other important aspect of being laid-off is the recall list. Sometimes, layoffs are temporary. And, while an employer may not be able to guarantee when or even if they’ll call you back to the job, it’s important to find out if a list exists. And, if it does exist, try to find out where you are on the recall list. Knowing that there is a list and how high you are on it may impact your job search plans.

When You’re Fired: The Specifics

Just like the layoff severance package, you will likely have to sign a non-disparagement and non-compete agreement similar to if you were laid off. And, in many cases, accepting the severance package also means that you give up your right to sue for unlawful termination.

Explaining What Happened in the Next Interview

Once the dust has settled, and your shock or anger has settled a bit, you’ll want to start your job search. However, how you deal with your situation on your resume, in your cover letter, and during the interview can impact how quickly you do—or do not—get another job.

How to Explain Getting Laid Off

When you’re laid off, explain the facts truthfully and honestly. Don’t express any anger about it (even if you are upset). Focus on the reality of the situation and talk about some of the positive things you learned from the job.

For example, “Unfortunately, the market changed rapidly, and there wasn’t enough work to go around, so they eliminated my position,” is a short and succinct explanation about what happened. From there, you can talk about the skills you gained and the experiences you had during your time at the company, and how they will benefit your new employer.

As long as you are truthful (you really were laid off and not fired—and your former company will confirm that during a reference check), most companies will understand that the reason you lost your job was entirely out of your control and that’s just a part of business life.

How to Explain Getting Fired

When you’re fired, you’ll want to follow a similar course of action. Explain what happened truthfully and honestly. Then explain what you learned from the experience. This can be the hard part. Admitting you were fired is never easy. But, if you treat it as a chance to start over and to learn from your mistakes, you’re turning a negative into a positive.

Once again, a short and simple answer is best. If you start sharing every detail about what happened, you risk veering into the negative, and you may end up sounding like a jerk who deserved to get fired.

Explain that you were fired, why you were fired, and what you learned. “Unfortunately, I was let go from the job. I think it was a bad match from the start because I didn’t really have the right skills to succeed in that job. But I didn’t realize it until it was too late, and no amount of training or practice helped make up for the deficit. That’s why I’m looking at this job. It’s a better match for my existing skills.”

This is a short yet honest answer that explains what happens and describes what you learned. You even mention what you tried to do to correct the situation, and you take responsibility for what happened.

Hopefully, your interviewer will note that you were upfront and honest about the situation and that you have learned from the experience. Growth in the face of failure is something most employers want to see in their employees, along with admitting their mistakes.

No matter how or why you lost a job, the time between jobs is a good time to take a step back and reevaluate your career and career path.

For example, did you really like the job, or were you just phoning it in? Sometimes we end up in a job for reasons we can’t explain. And, as a result, we end up disengaged and uninterested in what we’re doing, unconsciously self-sabotaging ourselves.

If that’s the case, it may be time for you to pursue something else. It may be a great time to consider a career change. But, if you really love your job, it may be that you lacked certain skills that you can improve. Were you terrible at accepting criticism, no matter how kindly it was delivered? Did you lack organizational skills and always delivered projects late? Do some critical self-examination and see what you can improve.

Bouncing Back From Getting Let Go

While there are differences between getting laid off vs. fired, sudden job loss is traumatic for anyone. Even if a layoff was announced (or you saw your termination coming), it’s still a difficult thing to deal with. Work plays such an important role in our identity that job loss can be a real blow to our self-image.

It’s normal to stay angry for a while and lick your wounds. But don’t do it forever. The sooner you start your job search, the sooner you’ll get a new job. No one likes talking about job loss, but now is a great time to tap into your network to find new opportunities in your current field, or maybe in a new one.

If you’re not sure what comes next, read about handling employment gaps on your resume, or find some advice on how to explain job loss during an interview. Or, get inspired by success stories of people who rebounded after job loss. And, if after all that you’re still feeling lost, consider speaking with one of our career coaches for more guidance.

MEET WITH A FLEXJOBS CAREER COACH >>>

We’d love to hear your thoughts and questions. Please leave a comment below!

All fields are required.